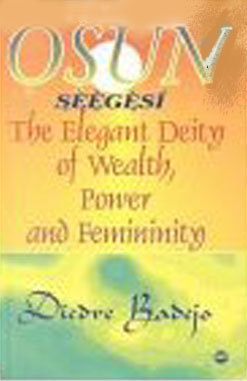 "On Shirley Hager and Agatha Younger"

A brief non-fiction essay about two extraordinary community college women educators who resuscitated my courage to pursue knowledge on my own terms. Published under the pen name, Delia Sebora.

Osun Seegesi: The Elegant Deity of Wealth, Power, and Femininity

Diedre Badejo's study is a tribute to the powerful and beautiful Yoruba deity of sweet water, Osun, who hails from the Osun River in Nigeria and has settled in the African diaspora in Latin America, the Caribbean, and the US as a result of the slave trade. Badejo's access to Osun is through the orature and ritual drama of the annual Osun festival performed in the Ijesa city of Osogbo. She gives the reader entrée to the subject in the transcription and translation of a poetic incantation chanted for Osun by priests dedicated to her service. Badejo acknowledges that she cannot convey the agility and grace of the priest's vocal performance. Instead, she transliterates and annotates the Yoruba text to get at the complex "symbolism, imagery, and meaning" in the poetry (2). In so doing, she enlisted the help of scholars of Yoruba language, art, and religion, Yiwola Awolaye, Rowland Abiodun, and Kehinde Olupona, respectively, to verify and nuance the text.

From the website - "I think anybody who goes on a sacred journey, anyone who ventures into another tradition is a soul searcher. They are seeking to find something within themselves they're trying to connect to." —Diedre Badejo, pilgrim to Osun-Osogbo

USC Dornsife College of Arts and Sciences Alumni Magazine
"In My Opinion" written as tribute to USC Dornsife's Joint Educational Project (JEP), and its impact on me as an undergraduate student-tutor at USC in this community-based program.
The Humanities Connection from the Maryland Humanities Council: Return, Retrieve, Renew: West African Language, Culture and Gender Roles
In this segment, MHC Board member Dr. Diedre Badejo reflects on the intricacies of West African language, culture, and the changing role of women.
Authors Guild
E-mail the Author
Loading…}